Important Notice From CBC's Shelagh Rogers: ﻿“The Cave does what the best cabarets do: takes aim at the status quo. A fable told by animals in Cree and English song, we leave The Cave understanding that if we don’t get off our fat complacencies, all life will be lost to the coming inferno. The creative trio behind The Cave, Tomson Highway, Martha Ross and John Millard are brilliant. They wield song and humour the way a surgeon wields a scalpel. You are so busy enjoying yourself, you don’t feel the cut–-not at first. The energy the performers bring to the production is incendiary. Breathtaking!”
A group of animals flee from a vicious forest fire and seek refuge in Bear’s cave. Waiting out the inferno, they reflect on their lives, their lost garden, and their impending doom. These unlikely and singed bedfellows share their stories and take comfort in their newfound community while the fire encroaches.

Go to this page https://thecultch.com/event/the-cave/ to see a trailer that features a great sneak peek of the show live on stage!

As the ravages of climate change become ever more terrifying it’s time to duck into The Cave for some cathartic musical theatre that’s been dubbed an “apocalyptic cabaret.”

The setup is simple: A rampaging forest fire threatens the survival of a group of animals that have sought shelter in a cave. But the cave is also a nightclub of sorts, and Moose, Beaver, Skunk, Snake, Wolf, Crow, Fox, and Bear prove to be a very talented menagerie as they talk and sing in both English and Cree, sharing songs and stories about the reckless human behaviour that has destroyed their homes. (Even though we humans are the villains of the piece, The Cave’s narrator mostly lets us off the hook by engaging the audience in a droll and playful manner.)

And what could have been a too-cute parable proves to be an unexpectedly poignant and engaging theatrical experience, one shot through with wry humour, great songwriting, and memorable performances. Created by composer John Millard, theatre veteran Martha Ross, and award-winning aboriginal playwright Tomson Highway, Cave was a resounding success when it debuted in 2019 at Toronto’s Luminato Festival. A brand new production of Cave was created during the COVID lockdown, notably enhanced with immersive “animation projections” by Vancouver animator Bruce Alcock, whose images of terrified animals fleeing a raging, roaring forest fire increased the power of the play considerably.

After being featured at the 2022 Luminato Festival, this new Cave is touring British Columbia in October and November before heading to California. Now theatre critic Glenn Sumi found the current production “consistently entertaining,” praising everything from the tongue-in-cheek narration to the tuneful and catchy songs before noting: “This handsome production made me think of everything from kids’ theatre and Weimar-era cabaret to Boccaccio’s Decameron.” Adds Toronto critic Megan Mooney, “There’s a lot to love about The Cave . . . After all, when it comes to the apocalypse, we’re all in this together.” 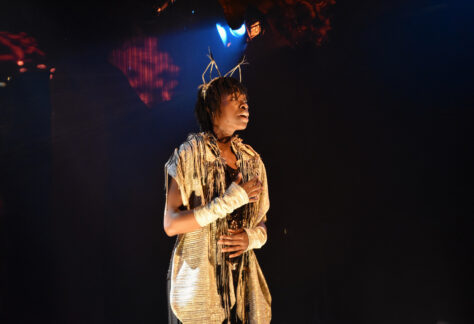 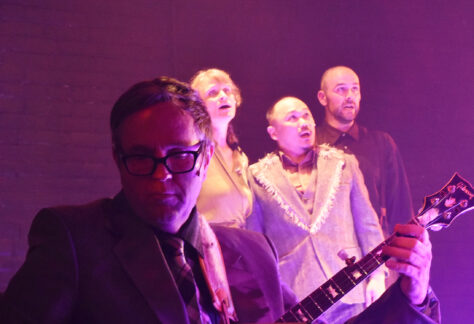