Important Notice Capacity is now at 100% but PHO still requires Covid Vaccine Passport with personal ID for entrance. Advance tickets at AGOG only please.
On the margins of Tokyo, a dysfunctional band of outsiders is united by fierce loyalty and a penchant for petty theft. When the young son is arrested, secrets are exposed that upend their tenuous, below-the-radar existence. 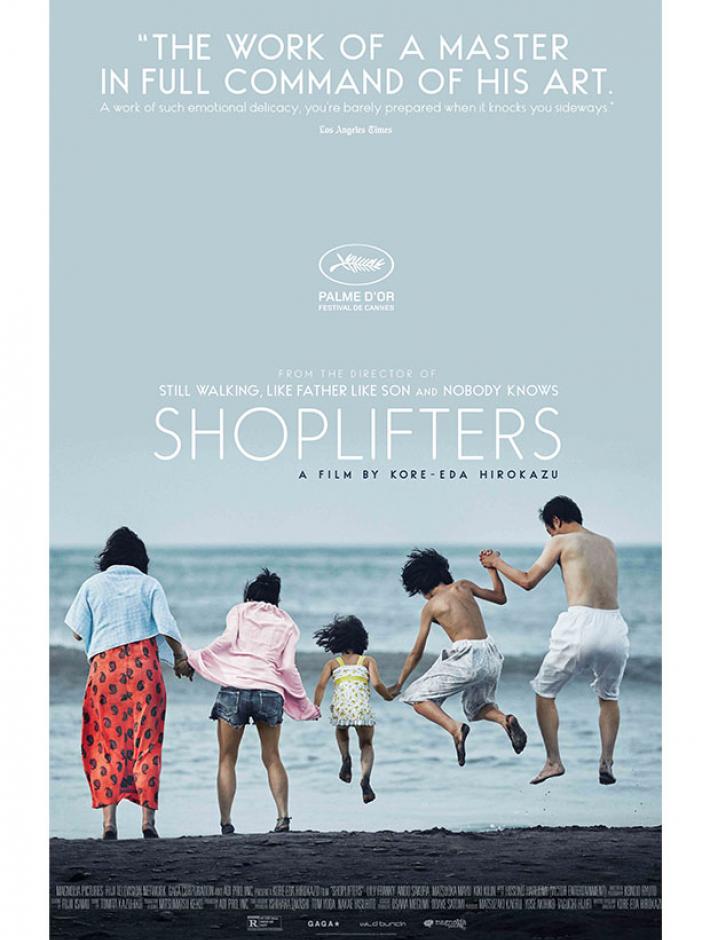 Hirokazu Kore-eda’s Palme d’Or-winning “Shoplifters” opens with a perfectly calibrated scene that sets the table for what’s to come. A man and a boy are in a store. They keep making eye contact, moving slowly through the aisles. They clearly have a level of non-verbal communication that feels like a ritual. They’ve done this before. They will do this again. And doing this brings them somewhat closer to each other, even if it’s illegal. Of course, what they’re doing is shoplifting, but we instantly get the feeling that they’re doing it to survive. They’re getting food for their family, not taking trinkets from a fancy store.

On the way home that night, just after commenting on how it’s too cold to go back and get some forgotten shampoo, the man and boy see a girl on a balcony. We get the impression they’ve seen her before. Despite their obvious need, the man offers the girl a croquette, and she ends up coming home with them. We learn that the man is named Osamu (Lily Franky) and the boy is named Shota (Jyo Kairi). At home, there are other mouths to feed. We meet the mother named Nobuyo (Ando Sakura), another woman named Aki (Matsuoka Mayu) and a grandmother (Kiki Kilin). And now there’s a new mouth with a girl named Juri. When Osamu and Nobuyo go to take the girl back that night, they hear a violent scuffle between parents who likely haven’t even noticed their daughter is gone. Nobuyo just holds Juri a little tighter and we know they’re not giving her back.

“Shoplifters” is full of gray areas. What exactly does family mean? Does giving birth to someone automatically make you a mother? Kore-eda has confronted the definition of family before in films like “Like Father, Like Son” and “Nobody Knows,” but this is one of his most nuanced, layered examinations of the concept.