Pig stars Nicolas Cage as a truffle-hunter who lives alone in the Oregon wilderness and must return to his past in Portland in search of his beloved foraging pig after she is kidnapped. Pig is unexpectedly touching. As a showcase for Cage's brilliance, it's a revelation. 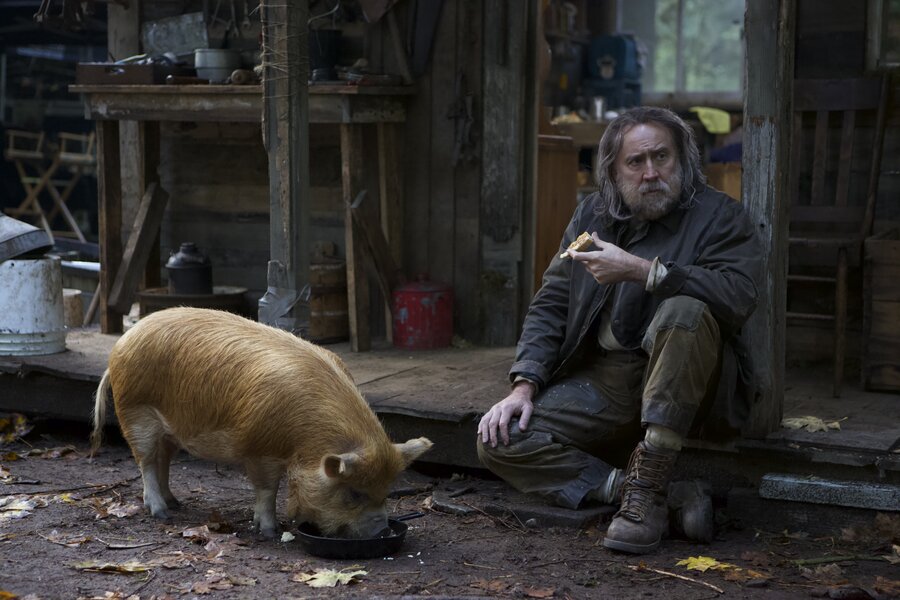 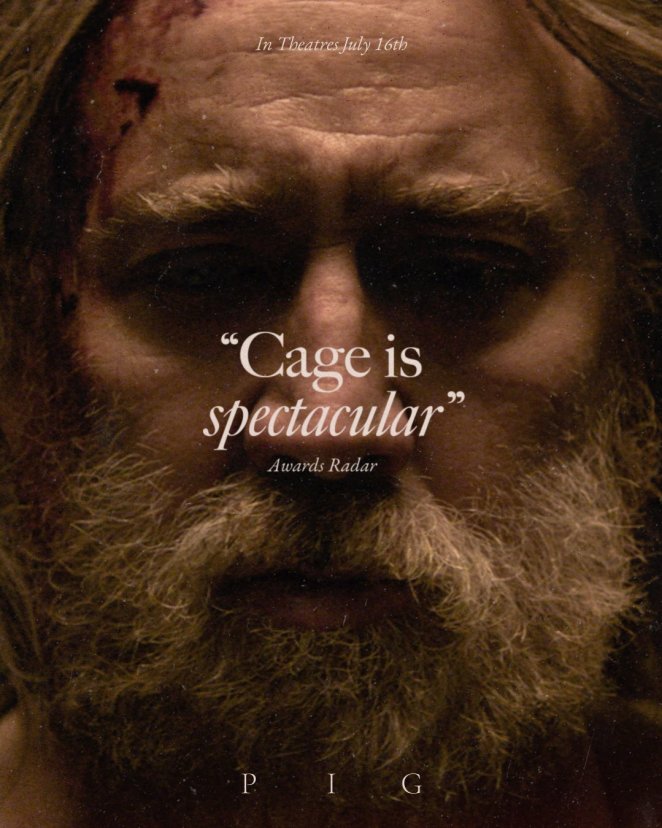 Our Film Kicks group has chosen Pig to include in the Fall season “because of it’s unusual subject matter and the rave reviews about Nicholas Cage’s performance!”

Now Magazine writes:
Michael Sarnoski’s first feature casts Nicolas Cage as Rob, an Oregon recluse who sets out to retrieve his beloved truffle pig from the people who’ve stolen her, by any means necessary.

This sounds a lot like another John Wick riff, with a premise that sets up multiple scenes of righteous, crowd-pleasing violence as our hero punches, shoots, kicks and stabs dozens of disposable dirtbags on his way to an ultimate confrontation with the film’s big bad. We know those movies; Liam Neeson makes what I assume is an excellent living starring in them these days.

Pig is not one of those movies.

As the single-minded Rob – accompanied by his truffle buyer, hipster middleman Amir (Alex Wolff) – works his way through a very specific sliver of Portland subculture, it becomes clear that Sarnoski and co-writer Vanessa Block are using the structure of the revenge thriller to tell a very different story. Pig has other goals, and to discuss them would be incredibly unfair to the movie and to the people reading this.

All I’ll say is that Sarnoski does exactly what he wants to do, and in a manner that allows Cage to give his finest performance in years – as intensely felt as what he did in Mandy, say, but devoid of the theatricality that enabled that film’s most absurd flourishes. He just commits, and commits fully, to everything the role requires, and Sarnoski knows exactly what he’s got in front of him.

Wolff provides effective support as Amir, a hustler who’s entirely unprepared for Rob’s intensity, and Adam Arkin eventually turns up as their mutual nemesis, a cold, empty kingpin who – again – isn’t quite who you’d expect him to be, given his position in this narrative. But that’s what Sarnoski and Block’s script is doing at every turn. Like an especially resourceful chef, Pig knows what it is that you think you’ve ordered, and delivers something that expands your understanding of what that dish could be.

Cage offers something genuinely special: a perfect performance, and one which could not exist without every other performance that the actor has ever delivered. Globe & Mail